Ever since 2009, after over thirty years of using voting machines, the red pencil and paper have been used for all elections in the Netherlands. On the instructions of Minister Plasterk of the Interior and Kingdom Relations, the Van Beek Committee in 2013 investigated if electronic voting could be reintroduced and, if so, what this would require. In its report the Van Beek Committee concluded that the time is right to reintroduce electronic equipment in the voting and vote counting processes. 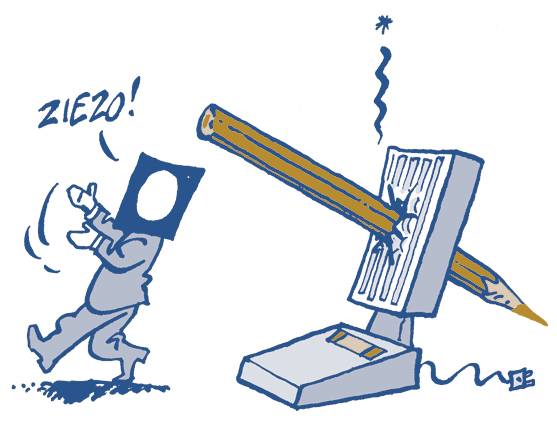 The debate on voting machines formed cause for the then Minister of Government Reform and Kingdom Relations to set up two independent committees in 2006. The Hermans/Van Twist Committee investigated what lead to the loss of confidence in the voting machines in use. The second committee, the Korthals Altes Committee, advised on the organization of the future election process and the related guarantees. The Korthals Altes Committee concluded that 'from the viewpoint of transparency and verifiability, voting with ballot papers in a polling station' is to be preferred. Since the 2009 elections to the European Parliament, the (red) pencil and ballot-paper have therefore been reintroduced in the Netherlands for exclusive use.

In view of all developments in the field of technology made since the Korthals Altes Committee report, Minister Plasterk of the Interior and Kingdom Relations in 2013 set up the Van Beek Committee. This new Committee was instructed to once again assess the election process guarantees in place and to investigate the possible use of electronic equipment to aid in the process.  The Committee in its report balanced the advantages and disadvantages of four voting and vote counting process models against each other. In the end, the Committee advised that a ballot printer and vote counter be used. This model would have the voter enter their choice of party and candidates on a ballot printer. The voters will next personally print a ballot paper listing their chosen parties and candidates and deposit their ballot paper in the ballot box. After the closing of the election, all ballot papers are to be counted using scanning equipment.

In its response to the Van Beek Committee report, the Electoral Council stated that the voting system proposed by the Committee (namely, ballot printer and vote counter) is also recommended by the Electoral Council. The Council did, however, stress that some risk is attached to every model of casting and counting votes. It is therefore not only necessary to balance the advantages and disadvantages of a voting system against each other, but also to assess the acceptance of any residual risks. The Council believes that comparison with the risks associated with the system in place should also be part of the assessment.

The Government, too, has declared its support for the implementation of voting by way of a ballot printer and counting votes by way of scanning equipment. The Government does believe the following questions still require answers: Does the proposal actually make the voting process more accessible to visually impaired voters? Would it be possible to have monitoring 'compromising radiation' become an indictable offence? What checks are required to determine the correctness of the electronic vote counting process? Furthermore, no proper estimate can as yet be provided of the actual costs of implementing this system of voting and vote counting.

With a view to removing uncertainties and reducing complexity, and to be able to produce a better cost assessment, Minister Plasterk of the Interior and Kingdom Relations established an Electronic Voting and Vote Counting in the Polling Station Expert Group in May 2015. The experts were charged with laying down the specifications the equipment to be used for electronic voting and vote counting has to meet. The Expert Group was also requested to investigate whether these specifications are widely supported.

In his letter to Parliament accompanying the Expert Group's report, Minister Plasterk also stated that he had initiated an exploration of the market on the basis of the specifications for the voting printer and scanner laid down by the Expert Group. The main goal of this exploration is to establish whether the market is able to provide products in accordance with these specifications, how long it will take to develop them and how much such a development would cost. Minister Plasterk expects to be able to publish the results of this market exploration in the autumn of 2016.