Results of the referendum on the Association Agreement with Ukraine

The majority of persons casting their vote in the advisory referendum on the Act of Parliament approving the Association Agreement between the European Union and Ukraine has voted against its passing: 61% voted against (2,509,395 voters), 38.21% voted in favour (1,571,874 voters) and 0.79% cast a blank vote (32,344 voters). These numbers concern the valid votes. 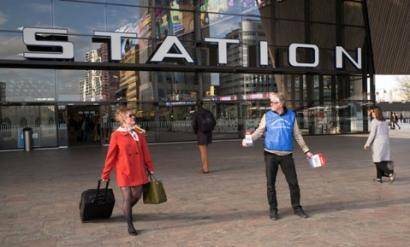 In addition, 0.92% (38,000) of all votes cast was invalid. Out of a total of 12,862,658 persons eligible to vote, 4,151,613 voters did exercise this right. This amounts to a voter turnout of 32.38%, meaning that the turnout threshold of 30% was reached. In consequence, the results of the referendum constitute an advisory opinion rejecting the Act approving the Association Agreement. This means that the government is to reconsider the Act. The results of an advisory referendum are not binding.

This was announced by the Electoral Council, acting as central electoral committee, in a public session on Tuesday, 12 April. Having inspected the official reports, the Electoral Council has found that the election generally ran smoothly. In coming to this view, it considered problems like the reduction of the number of polling stations, counting differences and issue of the poll cards. All in all, there is no reason to doubt the validity of the election and the correctness of the results.

In total, 11,804 Dutch voters staying abroad have cast their vote in the referendum by post. The total number of proxy votes cast was 451,087 (or 10.87% of all votes cast). In total, 8,379 polling stations were established for the referendum, or a 10.5% reduction compared to the number of polling stations available for the elections to the European Parliament (9,361).

Voter turnout was highest in the municipality of Rozendaal (Gelderland), where 49.1% of voters cast their vote, and lowest in Sint Eustatius, with a turnout of 2.6%.
The highest percentage of votes in favour of the Act were cast in Wageningen, with 62.4% of all valid votes being in favour, while the Urk figure of 16.4% was the lowest. Conversely, with 83.3% of valid votes cast, Urk had the highest percentage of votes cast against the Act, while this percentage was lowest in Wageningen, coming to 36.0%.

The determination of the results of the referendum may be appealed. Interested parties may directly appeal to the Judicial Division of the Council of State within six days of the session, i.e., up to and including Monday, 18 April.