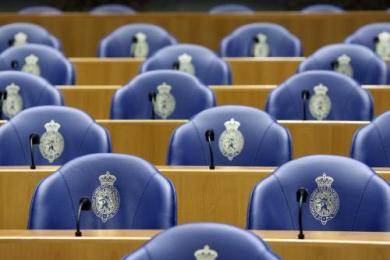 The 150 seats were allocated as follows:

The other participating parties did not gain a seat:

To allocate the 150 seats among the 28 participating parties, the number of ‘full seats’ each party had gained was first defined. This number of seats equals the number of times the list or the combination achieved the electoral quota. In the initial allocation, 142 full seats were allocated. A remaining 8 residual seats had therefore to be allocated. 2 residual seats were allocated to the VVD, one to the PVV (Partij voor de Vrijheid), one to the CDA, 1 to the SP (Socialistische Partij), 1 to the Partij van de Arbeid (P.v.d.A.) – GROENLINKS combined list, 1 to Democraten 66 (D66) and 1 tot the Partij voor de Dieren. The Electoral Council also calculated how the seats would have been allocated if there had been no combined lists. In such a case, the allocation of seats would have been the same.

A total of 1.116 candidates were included in the lists of the 28 parties that participated in the elections. The youngest candidate elected was 25 years, Mr R. (Rens) Raemakers (Democraten 66), and the oldest candidate elected was 74 years, Mr M.J. (Martin) van Rooijen (50PLUS). Of the elected candidates, 96 were male (64%) and 54 female (36%). On each list, the winning candidates for whom the number of preferential votes cast was above 25% of the electoral quota were declared to have been elected first. This is referred to as the preference threshold. The preference threshold was 17.527 votes. Thereafter, the remaining seats for the parties were allocated to candidates in the order in which they appeared on the list.

Of the 43 candidates who passed the preference threshold and were elected, there were 4 who were not otherwise elected: Ms E.M.J. (Lilianne) Ploumen (Partij van de Arbeid (P.v.d.A.), Mr M.R.H.M. (Maurits) von Martels (CDA), Ms L.I. (Isabelle) Diks (GROENLINKS) and Ms E.M. (Lisa) Westerveld (GROENLINKS). Three candidates did pass the preference threshold but did not gain a seat, because no seats were allocated to the list on which they were declared. These were the top candidates for de Piratenpartij, Ms A.T. (Ancilla) van de Leest , Artikel 1, Ms S.H. (Sylvana) Simons and VNL (Voor Nederland), Mr J.H. (Jan) Roos..

In total, 80.660 Dutch voters abroad registered to take part in the elections to the House of Representatives. In 2012, this figure was 48.374. Of those who registered to vote abroad, 68.132 stated that they wanted to cast their vote by post. Of these, 59.857 did cast a valid vote by post.

Validity of the elections to the House of Representatives