What will be the procedure to determine the results of the 2017 House of Representatives results?

In the 2017 House of Representatives elections, voting and counting will take place manually at the polling stations, similar to earlier elections. However, a new feature is that municipalities, principal electoral committees and the central electoral committee will, subsequently, calculate the results at party level manually. In addition, they will only be allowed to use software (Supporting Software for Elections) to check these counts and to work out the results at candidate level. The counts were already - exclusively - passed on by the polling stations on paper. Now, municipalities and principal electoral committees too may only pass on vote totals on paper. All documents on which the final results are based, will be available for inspection or be published on the internet. As such, the results will be verifiable for everyone. What will be the procedure?

Polling stations will be open from 7:30 am to 9 pm on 15 March. Since 2009, votes have been cast in the Netherlands by means of a red pencil on paper, after having used a voting machine for over 30 years alongside pencil and paper. 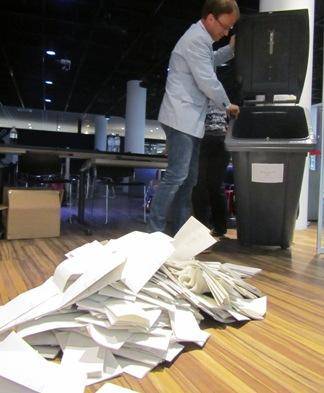 Once the ballot boxes have been closed at 9 pm, the electoral committee members will start manual counting of the votes. Voters may attend counting of the votes. The electoral committee members will first asses how many persons entitled to vote have cast their vote. They will do so by counting the number of valid voting passes, voter's cards and proxy certificates. 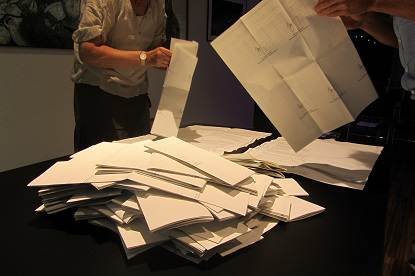 After opening the ballot boxes, electoral committee members will first execute a fast count at list level: an addition of all valid votes granted to each political party. The polling stations will pass on the results of this fast count to their municipalities by telephone. The municipalities will pass on the total number of votes in their municipality to Dutch News Agency ANP (Algemeen Nederlands Persbureau). NOS (Netherlands Broadcasting Corporation) will present preliminary results on the evening of election day based on these vote totals. 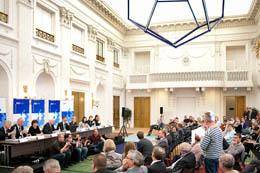 Every step in determination of the election result (vote counts at polling stations, principal electoral committees, session of the central electoral committee) will be recorded in an official report. These will either be available for inspection or published on line. Sessions of principal electoral committees and the central electoral committee are open to the public. Voters may put forward any objections at these sessions. These objections will be recorded in the official report.
The - limited - use of software as a calculation tool must meet various requirements, part of which are additional requirements. As such, software will only be used on computers that are not connected to the internet. Every step will be verified by a second person (‘four-eye principle’). And vote counts will no longer be transferred digitally.